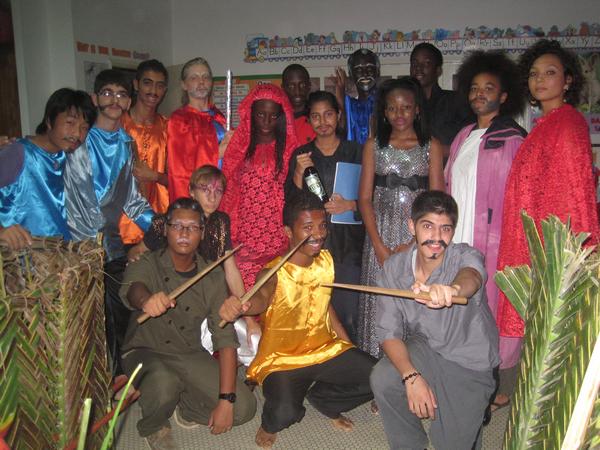 Every year EIS produces a Shakespeare play as an aid to the English Literature IGCSE. This year's production was 'The Tempest' and those of us who were able to attend Year 10's production experienced a real treat.

The play opened with a mighty storm which castaways the crew and passengers of a doomed ship on a strange enchanted island ruled by a magician, Prospero. Prospero was played by Mie Knudsen who was commanding and imperious in the part. Sophia Brown as the slave/monster Caliban gave an entertaining performance while Jennifer Quenum and Bernard Elendu, as Miranda and Ferdinand, acted with sensitivity and maturity. Lucas von Behaim as Ariel the spirit was impish and engaging while holding the play together and Ousmane Thioune projected solemnity and authority in the part of King Alonso.

The interaction of King Alonso and his courtiers played by Julien Carsky - Gonzalo, Mike Weissbecker - Sebastian and Brian Manglani - Antonio, were able to capture the intrigues of courtly life; comedy was successfully introduced into the play by Achraf Hage Ali and Shikha Vaswani as Trinculo and Stephano who try and are successful in getting Caliban to try beer.

Louai Hanano, Olivier Ndikumana and Suocheng Zhao made up the crew of sailors and Korotum Kagnassy and Jasmine Carsky as the goddesses Juno and Ceres brought magic and enchantment with their dancing.

Shakespeare's plays are difficult to follow and even more difficult to learn and understand. This production was a remarkable achievement for a group of students who have English as second ot third language.

I thank Mrs Carsky for the dedication she gave in encouraging the students of Year 10 to produce such a high standard of work and for giving them the opportunity to develop confidence in their abilities. I am already looking forward to next year’s production and look forward to seeing you there.

The most important lesson we learned this year was the value of Interdependence; hence, it became the theme of our 2020 - 2021 Yearbook.

E.I.S. wishes everyone Happy Holidays with a message about the environment.

'Where Does Our Packaging Go?' Reusing Plastics

Read more … 'Where Does Our Packaging Go?' Reusing Plastics

On the 22nd of March 2021, Year 2 pupils of The English International School joined the rest of the world to celebrate World Water Day with the 2021 theme, Valuing Water.

E.I.S. alumna introduces capoeira to fellow students at her university in Bremen, Germany

Andrea Melissa EL HAJJ, who after 11 years of practising the Afro-Brazilian martial art / dance at E.I.S., writes to us from Jacobs University where she has started her own Capoeira Club.